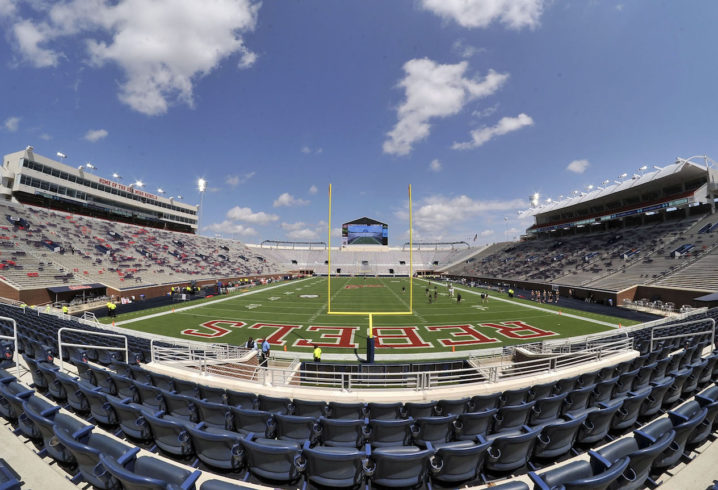 A landmark of Ole Miss tradition and an anchor for the strong future of Rebel Football can be found on the southeast side of the University of Mississippi campus and it is none other than the Vaught-Hemingway Stadium.

The stadium has received several upgrades in the last few years. Its most recent and significant expansion was in 2016. The renovation increased the capacity to 64,038, making Vaught-Hemingway the largest stadium in the state of Mississippi.

The facelift gave Rebel fans an even greater gameday atmosphere and of course, more seating. The north side of the stadium was closed for renovation to provide additional student seating and transformed into an exciting new “front door.” The north plaza and the Jake Gibbs Letterwinner Walk was re-opened in fall 2017. Where else, the expected completion of the Lloyd Bell Tower is spring of 2018.

Other improvements include a new video board and sound system, stadium lights, as well as a natural grass playing surface. The natural grass playing surface is finally returning to Hollingsworth Field for the first time since 2002. Additionally, a green space be extended to the Walk of Champions from The Grove all the way to the new plaza. Ole Miss is one of 10 facilities (both pro or collegiate) that earned the 2017 Facility of Merit Award.

Miss Ole won the award thanks to its efforts in making the facility a better venue for all. Some of the efforts included a $200 million Forward Together capital campaign. As part of the campaign, the south end zone was also renovated to add 30 luxury suites and 770 club level seats, and the west suites were all refinished for the 2015 season. Other than that, upgrades leading up to the 2013 season had the sideline platforms removed and they bricked the east and west side facade. A team halftime locker room and two on-field suites were added too.

In 2002, the stadium increased its capacity to 60,58 with the bowling in of the south end zone.

The additional seatings helped the Rebels set record-breaking attendance figures over the last 13 years. The addition drew all 10 of the largest crowds in school history. It was the match between Ole Miss versus Alabama in 2009 that attracted a crowd of 62,657, the second largest ever to watch a football game on campus in Mississippi.

During the summer of 1988 until the summer of 1990, the stadium received a major facelift. The facelift included a new press box, new aluminum sideline seating, lights, and a club level section for 700 people. Later in 1997, a Sony JumboTron scoreboard/message center was added. In 1998, an upper deck was added on the east side of Vaught-Hemingway Stadium and it was named Guy C. Billups Rebel Club Seating. The addition included a special seating section with an enclosed concession and lounge area, pushed capacity to over 50,000.

The stadium is named for the late Judge William Hemingway (1869-1937). He was a professor of law and longtime chairman of the University’s Committee on Athletics. On Oct. 16, 1982, John Howard Vaught saw his name added to the stadium. The university honored Vaught as he compiled a 190-61-12 record as head football coach at Ole Miss and brought the Rebels National Championships in 1959, 1960 and 1962. At the 1998 season opener against Memphis, the field was named in honor of Dr. Jerry Hollingsworth for his continuing generous support to Ole Miss Athletics.

The University’s nickname became part of the University more than 100 years ago. In 1896, it was selected in a contest held to identify the new yearbook publication. The name was suggested by the late Miss Elma Meek of Oxford.

The name gradually became equivalent to the University and is now an important part of the University history. The late Frank E. Everett, Jr., put it best when he wrote:

The name REBELS was chosen as Ole Miss’ official athletics nickname in 1936. It was suggested by Judge Ben Guider of Vicksburg as one of five entries submitted to Southern sports writers for final selection from a list totaling more than 200 proposed nicknames.

The promotion was a contest sponsored by The Mississippian, student newspaper. 21 out of the 42 contacted newsmen responded and “Rebels” was the choice of 18 of them. The University Athletic Committee made the name official with the Committee chairman, the late Judge William Hemingway, stating: “If 18 sports writers wish to use ‘Rebels’, I shall not rebel, so let it go ‘Ole Miss Rebels.'”

Ticket Policies:
Read up on the ticket guarantee and our chosen ticket marketplace on the Vaught-Hemingway Stadium tickets page.